An emotional Andres Iniesta broke down in tears as he delivered a farewell speech at Camp Nou after playing his last game for Barcelona .

La Liga champions Barca ended their season with a 1-0 win over Real Sociedad but it was all about departing great Iniesta on Sunday.

The 34-year-old midfielder closed the curtain on his illustrious Barcelona career in the 81st minute as he left the field to a rapturous reception upon handing the captain’s armband to Lionel Messi.

“Today is a difficult day but it’s been 22 marvellous years. It’s been a pride and a pleasure to defend and represent this badge, for me, the best in the world,” said Iniesta, who made his senior debut in 2002.

“Thanks to all my team-mates, each and every one. I will miss you all so much. And thank you to the fans, for all your love, everything you’ve made me feel since I arrived here as a boy, I leave as a man. I will keep you in my heart forever.

“To finish, this week has left me speechless. Visca Barca, visca Catalunya, and visca Fuentealbilla (his home town).”

Barcelona team-mate Ivan Rakitic heaped praise on his outgoing team-mate, who is rumoured to be joining J.League outfit Vissel Kobe. 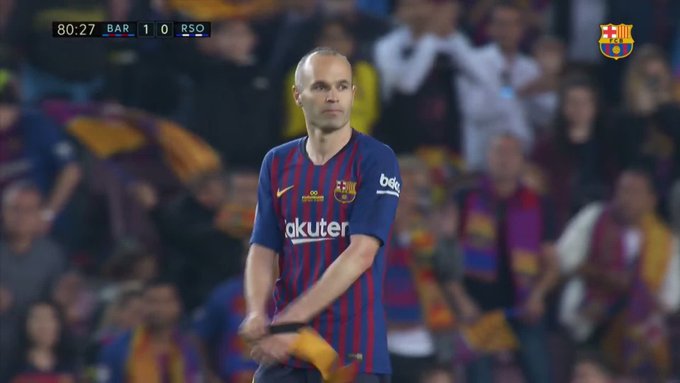 “It is a real pleasure to share all those moments with him,” Rakitic said. “With Andres I won a friend for life, I have a lot of affection for all his family. It will be unforgettable what I have lived with him.”

Mon May 21 , 2018
The 30-year-old has not been named in Roberto Martinez’s 28-man provisional squad despite an impressive campaign for Roma Roma midfielder Radja Nainggolan has been omitted from Belgium’s squad for this summer’s World Cup. The 30-year-old has played a key role in the Red Devils’ resurgence in recent years but has […]