Interim manager Duncan Ferguson was “devastated” by Everton’s penalty shootout defeat to Leicester City in the Carabao Cup, but he believes there is potential to build on at Goodison Park.

Amid reports former Real Madrid and Bayern Munich coach Carlo Ancelotti is set to take charge, Everton fought back from two goals down against high-flying Leicester on Wednesday, only to lose 4-2 on spot-kicks.

James Maddison and Jonny Evans put Brendan Rodgers’ side in control by half-time, but Tom Davies’ volley paved the way for Leighton Baines to force penalties with a stunning stoppage-time equaliser.

Jamie Vardy scored the decisive spot-kick, however, sending Leicester through to their first Carabao Cup semi-final since 1999-00.

Ferguson was left to rue a slack first half, but he believes his successor – seemingly Ancelotti – has the basis of a promising squad.

“I am devastated, and the players are, too,” Ferguson told a news conference. “We were too passive in the first half, just not aggressive enough. We were much better in the second half but we’ve just come up short.

“It’s difficult because it was practically the same team as the weekend, and we’re down to the bare bones at the minute. But we’ll pick ourselves up and go again for another massive game [against Arsenal] on Saturday.

“We have great potential. There is a great team spirit here, and there’s something to build on. The players have given me every ounce of energy they have over the past three games – and I thank them for that.

“I’ve loved every moment of this. The first two results help you, and I’m proud tonight about the second-half performance. But for the fans, not getting to the semi-final, I’m devastated.” 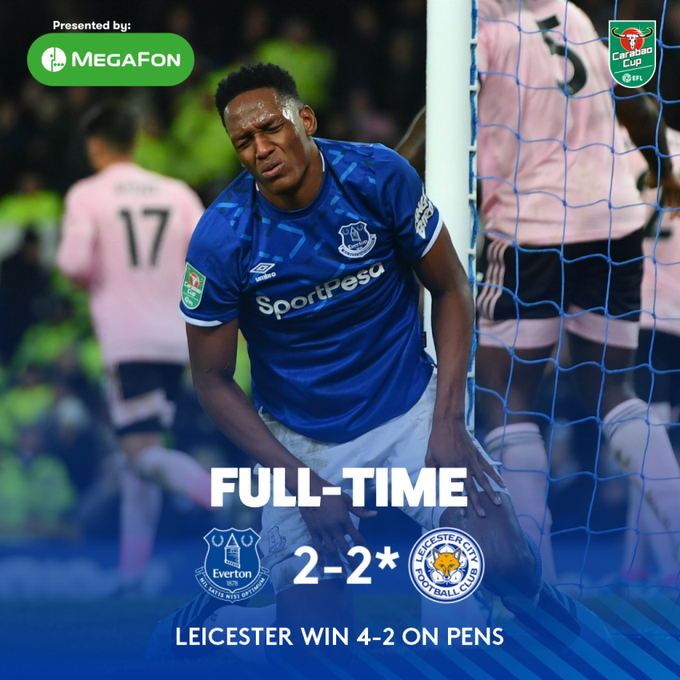 Ferguson caused some controversy on Sunday when he took off Moise Kean just 19 minutes after the former Juventus youngster had come on as a substitute in the 1-1 draw at Manchester United.

Kean was introduced at half-time on Wednesday and looked sharp as Everton rallied, with an excellent cross for Dominic Calvert-Lewin, who headed over, a highlight of the 19-year-old’s display.

“I spoke to him [before the game] so there’s no problems at all,” Ferguson said of Kean. “I thought he did well tonight. It was a good reaction, but we go again for Saturday.”

Leicester boss Rodgers, meanwhile, has now progressed in 29 successive cup matches across spells with Liverpool, Celtic and the Foxes, but he praised his counterpart for his impact since Marco Silva’s dismissal.

“I think what you’ve seen in these last few games is that [Ferguson] has given the crowd and the team real spirit,” Rodgers said.

“He was great on the touchline. When I saw him from the outside, he’s a true Evertonian, but he’s also a very good coach.”

Mac Miller producer says ‘Circles’ was meant to be part of...