Glastonbury is set to introduce a new official camping area for 2020 in a bid to reduce waste left onsite.

The Sticklinch campsite will be located in the former West Campervan Fields area at next year’s 50th anniversary event, offering “unpretentious, custom-made and pre-erected accommodation” for those hoping to travel light.

Podpads, yurts and bell tents, alongside Glastonbury’s “signature scout-style tents” will be available to guests. Organisers say Skticklinch will give punters “a more gently undulating walk to the festival site, ideal for those who find the climb to Worthy View challenging.”

Though festivalgoers will be able to park their cars in a nearby adjacent field, Glastonbury encourages people to travel via public transport as they continue in their efforts to be as green as possible.

Those looking to book the new accommodation can expect to pay £325 for a two-person scout tent, or up to £1,150 for a six-person octopod. A yurt suitable for four people will cost £850. 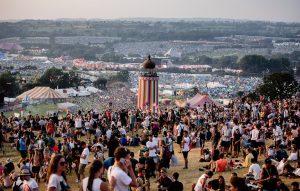 Sticklinch passes will go on sale tomorrow (November 21) at 7 pm along with Worthy View, Tipi Village and campervan tickets. You can find more information here.

Following this year’s festival, Glasto boss Emily Eavis described the state of Worthy Farm as a “massive improvement” on 2017.

Just one day after attendees went home, Eavis posted an aerial photo of the site along with the caption: “Just heard that 99.3% of all tents were taken home. That is absolutely incredible… HUGE thanks to the record numbers who loved the farm and left no trace!”

Meanwhile, Paul McCartney has been announced as the first headliner for Glastonbury 2020. The Beatles icon will close the festival’s Pyramid Stage on Saturday, June 27.

So far, it’s been confirmed that Diana Ross will tackle the Sunday afternoon Legends slot, while the likes of Taylor Swift and Kendrick Lamar are also heading up bookies odds for a slot on the Pyramid.

Naira Marley is a graduate with B.A & Msc but his fans keep shouting ‘Marlians no dey graduate’ – Lady writes

Naira Marley is a graduate with B.A & Msc but his...