Megan Rapinoe has claimed she is “not going to the f*cking White House” if the United States win the Women’s World Cup.

Defending champions USA face hosts France in the World Cup quarter-finals in Paris on Friday after defeating Spain 2-1 in the round of 16 on Monday.

Asked if a visit to the White House would be on the cards should USA retain their title, star Rapinoe told Eight by Eight: “I’m not going to the f*cking White House.

The 33-year-old became the first white athlete to kneel during the national anthem before a sporting event in 2016.

Rapinoe continues to protest the national anthem in her own way at the World Cup by standing in silence while other members of the national team place their hands over their hearts and sing ‘The Star-Spangled Banner.’ 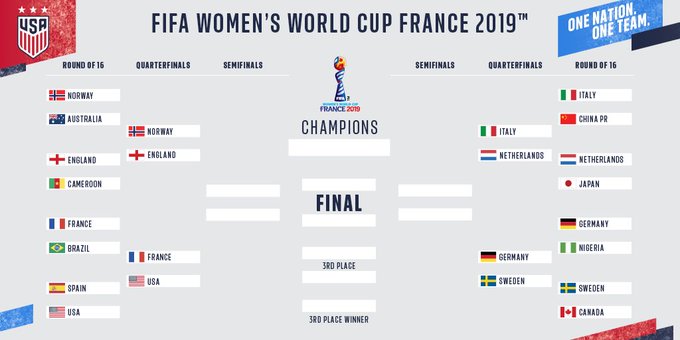 United States president Donald Trump responded to her actions on Tuesday, telling The Hill when asked if Rapinoe should protest during the national anthem: “No. I don’t think so.”

The US president has been highly critical of athletes who decide to protest during the national anthem however, describing it as a “a total disrespect of our heritage” in 2017.

Rapinoe’s Eight by Eight interview also touched on the expectations that drive the team to chase another world title.

USA had their toughest match of the World Cup on Monday when Spain scored the first goal of the tournament against the reigning champions.

Rapinoe scored USA’s only goals in that match as the international powerhouse prevailed 2-1 to keep their hopes of retaining the trophy alive.

“We have a great burden of expectation, but I think that also brings out the best in you and we just except to win every single game,” she said.

“So if we’re down two-nil with 10 minutes left, we expect to win that game. We’ve been in those situations before and it’s just sort of ingrained in us.”

'I don't want to be an embarrassment' – Thiago Silva

Wed Jun 26 , 2019
Brazil and Paris Saint-Germain defender Thiago Silva said he is taking inspiration from Zinedine Zidane and plans to retire before he becomes “embarrassing”. Thiago Silva, who made 39 appearances across all competitions for Ligue 1 champions PSG last season, has played in all three of his country’s Copa America games so far. Retirement does […]

There is nothing left in Nigeria – Oyedepo

Pastor Kumuyi tells members: “I will return all your tithes and offerings if you’re a sinner”

I will never restructure Nigeria – Buhari