Maurizio Sarri said it might be best to walk away while he is still adored by Napoli fans as the Italian boss cast doubts over his future.

Sarri’s future is far from certain despite threatening to dethrone six-time reigning Serie A champions Juventus, with his free-flowing and entertaining Napoli side set to finish runners-up following Sunday’s 2-2 draw against Torino.

The 59-year-old – who arrived from Empoli in 2015 – has been linked with a move to the Premier League, where Chelsea and Arsenal have emerged as possible destinations.

Talk of swapping Italy for England intensified following criticism from outspoken Napoli president Aurelio De Laurentiis, who blamed a lack of squad rotation for burning out the players after the club’s Scudetto hopes faded.

Sarri confirmed he has an €8 million release clause in his contract as he dismissed claims of a rift with De Laurentiis post-match, though his future remains clouded.

“If you only think about the fans, you really want to stay here as long as you live and probably threaten a terror attack if the president wants to sack you,” Sarri told reporters.

“You can’t find these fans elsewhere, this is a very important thing. But you also have to think about other aspects. But if this is going to end I want Napoli to be the memory of a lifetime for me.”

“I will forever be grateful to the president, as he allowed me to experience something extraordinary. I made all the decisions that I thought would improve our status in the competition that the fans cared most about,” Sarri added.

“If the president is happy with my work, then great. If he’s not happy, then that’s a pity, but there are ways out for both parties. If he calls me, I’ll gladly talk. 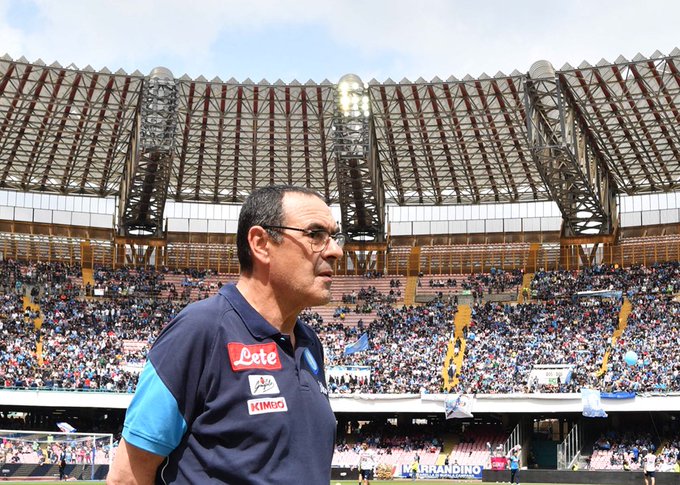 “What Napoli fans make you experience is remarkable, but it also puts fear in you that it could end. It can make you think that it might be best to walk away when there is still reciprocal love rather than risk moments of difficulty.

“When we lost to Real Madrid, I stayed because of the love of the fans. Naples gives you love, it is the ideal city to win and any victory feels so much better here. Unfortunately, we are not the richest and most powerful club in Italy.”

Napoli captain Marek Hamsik added: “I really hope Sarri stays, because he has helped improve both the team and everyone around Napoli.

“It’s fundamental that he remains, as he created a spectacular group and the fans know it too, which is why 50,000 come to every game.”