Cristiano Ronaldo is closing in on yet another record after matching the Clasico goal mark of Real Madrid legend Alfredo Di Stefano.

The Portuguese forward was back among the goals on Sunday in his latest outing against Barcelona.

He has made a habit of tormenting the Catalan giants down the years, with even this season’s La Liga title winners unable to keep the mercurial 33-year-old quiet.

Ronaldo has now found the target on 18 occasions in meetings between the old adversaries, with nobody to have represented the Blancos able to better that return.

Iconic frontman Di Stefano did manage the feat during his distinguished career, but he has now been caught by a modern day hero.

Ronaldo had seen Barca take the lead at Camp Nou inside 10 minutes through Luis Suarez.

He was, however, to level just four minutes later, with the ball bundled home after Karim Benzema had nodded back across the face of goal.

Just one more Clasico effort is now required for the five-time Ballon d’Or winner to hold another notable record outright. 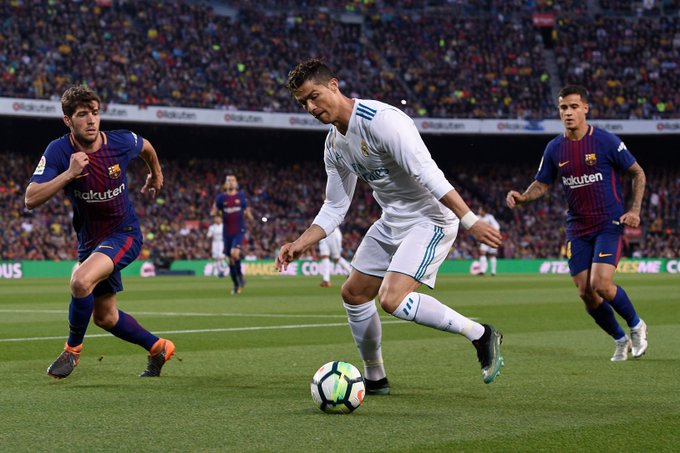 Ronaldo also requires only one more goal to hit an impressive landmark for Madrid.

His first-half effort against Barca was the 449th of his Real career, with that remarkable return achieved in just 436 appearances.

He now has 42 in all competitions this season, with his exploits having helped to carry Zinedine Zidane’s side through to a third successive Champions League final.

Mon May 7 , 2018
The Argentine was not to be denied a customary goal against the Blancos on Sunday, with his effort raising the bar a little higher in Catalunya Lionel Messi was on target again for Barcelona against Real Madrid, with a new record set in terms of Clasico goals at Camp Nou. […]