Per Mertesacker was taken aback by the standing ovation he received as the retiring Arsenal defender played his final match at the Emirates Stadium.

It was an emotional day in London, where outgoing Arsenal manager Arsene Wenger and Mertesacker featured in their last home game as the Gunners routed Burnley 5-0 in the Premier League on Sunday.

Mertesacker – who arrived from Bundesliga outfit Werder Bremen in 2011 – came off the bench with 13 minutes remaining.

And the 33-year-old German, set to become Arsenal’s academy manager next season, was overcome with emotion as he farewelled the Emirates as a player.

“It was a beautiful moment,” Mertesacker told Arsenal Player. “It is difficult to sum it up now. It was brilliant, how the team performed and the manager letting me on for the last time.

“The good thing was we were 5-0 up [when I came on], so I could really take that warm welcome and the emotions to enter the pitch for the last time.

“It’s magnificent the way I was welcomed from the first day, and for the great finish as a football player. That’s brilliant and it speaks of this classy club by giving me the opportunity to get such a great ending.” 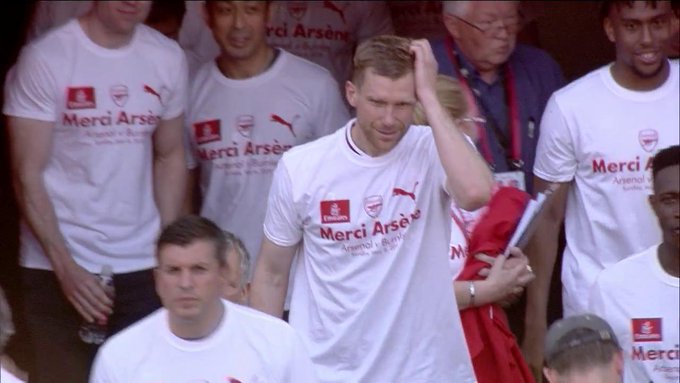 Mon May 7 , 2018
The Napoli manager’s future remains clouded amid links with clubs in the Premier League Maurizio Sarri said it might be best to walk away while he is still adored by Napoli fans as the Italian boss cast doubts over his future. Sarri’s future is far from certain despite threatening to […]