Mauricio Pochettino praised a “massive achievement” for  Tottenham ‘s after a1-0 victory over Newcastle United secured their place in next season’s Champions League.

A well-taken goal from Harry Kane proved to be the difference between the two sides on a tense night at Wembley, where Spurs found themselves under pressure from a Newcastle side playing with freedom, having already avoided relegation from the Premier League.

The result moved Spurs up to third and put paid to fears of their season ending in failure following a slump in form while setting up a season of Champions League football in their new stadium.

“To achieve the top four is a massive achievement,” Pochettino told reporters. “I want to congratulate the players first of all and then the staff.

“Massive congratulations and thank you to all the staff because they have been fantastic and have worked so hard for nearly 38 games away from home.

“For the club it is a massive thing to move to the new stadium and play Champions League. It will be another challenge because it will be the same as playing at Wembley. Yes, it will be a fantastic stadium but we need to make it home and we need time.”

Pochettino picked out Moussa Sissoko as one of Tottenham’s key players in a match where the France international was called upon to show his defensive qualities as often as his creative ones.

“I am so happy and so proud of the players and all of the players,” said Pochettino. “For me one of the best today was Moussa Sissoko. I thought he was fantastic.

“It was a difficult game for us. To play with pressure against a team who have freedom and nothing to play for, it can be dangerous. 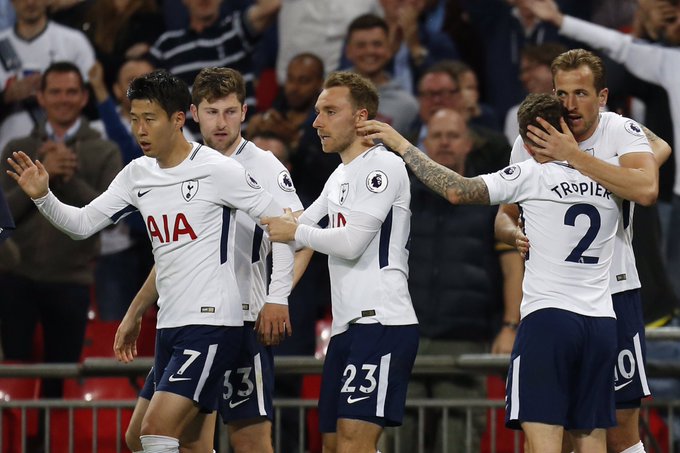 “They made it difficult. We rushed some decisions and made mistakes.”

The Spurs boss also knows that there is a next step for his side moving forward.

“The first step is always to be competitive, to reduce the gap to the top four. That was the challenge four years ago,” he said.

“Now, after 23 years in the Premier League, this is the first time Tottenham are above the other London clubs.

“The next thing is to win a trophy, but you need to build. We are not at a club that wins a lot in the last [few] years. To create a winning mentality you must build it step by step, then be competitive with the big sides.”

Rafael Benitez felt his side were hard done by, drawing parallels with his view of Newcastle’s 2-0 home defeat to Spurs in August 2017, but picked out midfielder Jonjo Shelvey as the visitors’ stand-out player.

“We had 14 attempts against Tottenham at home and two penalties not given. We deserved something,” Benitez told Sky Sports.

“Today [Wednesday] we were doing almost everything well against a good team. It is a pity. Tottenham were a bit anxious and we had enough chances to score.

“If we have time on the ball for Jonjo Shelvey he can make things happen. He is a different kind of midfielder. Different types of players give you different options.”

'You pay for errors' - Gattuso disappointed after Coppa Italia letdown

Thu May 10 , 2018
AC Milan did not deserve to lose so heavily in the final against Juventus on Wednesday, according to their head coach Gennaro Gattuso called on AC Milan ‘s players to take the 4-0 defeat to Juventusin the Coppa Italia final on the chin and come back stronger. The Rossoneri kept their opponents quiet before the […]