Skip to content
Yaya Toure hailed his “perfect” final season at Manchester City, as he prepares to call time on his eight-year stint at the club.

Yaya Toure lauded Manchester City ‘s campaign as “perfect” after he completed his final home game for the club in the 3-1 victory over Brighton and Hove Albion , highlighting his winning goal in the 2011 FA Cup semi-final against Manchester United as his finest moment.

Toure will leave City at the end of the season, having become a bit-part player under Pep Guardiola, bringing his eight-year spell at the club to a close.

To mark his final appearance as a City player at the Etihad Stadium, Toure captained the side against Brighton, as goals from Danilo, Bernardo Silva and Fernandinho – all set up by the fantastic Leroy Sane – moved the Premier League champions onto a record tally of 97 points .

Toure was given his own presentation after the final whistle and, speaking to City’s fans, the Ivorian – who has said he may remain in the Premier League – spoke glowingly of his love for the club.

“It’s perfect, I think the club deserves that and the fans deserve this season,” Toure said.

“People are talking about me doing something for this club, but we have to thank players like Joe Hart, Pablo Zabaleta, Joleon Lescott as well.

“The most important moment for me was the goal against United [in the 2011 FA Cup semi-final]. After we won that trophy, everything started.

“I’d like to thank Sheikh Mansour, City had been in the shadow of United and he has brought happiness to the fans, and the fans, who have supported me and my family.” 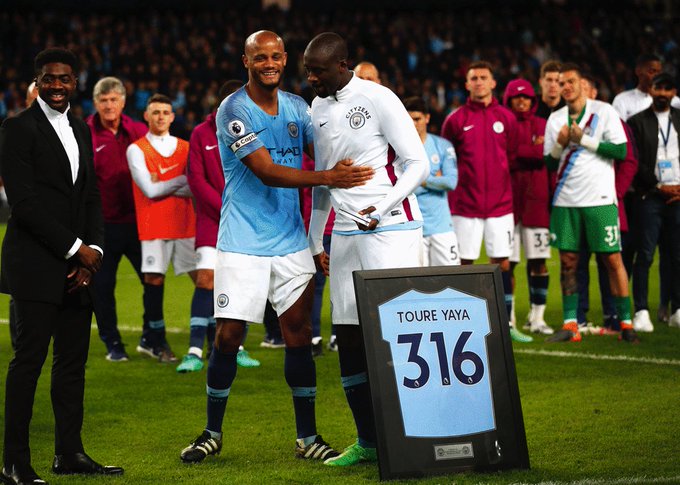 Toure joined City in 2010, and went on to claim seven major honours with the Citizens having been convinced by his brother Kolo to leave Guardiola’s Barcelona, and the former defender made a surprise appearance alongside his younger sibling.

“I told him, you have to come to City. City wanted to be one of the best in Europe, in the world,” Kolo Toure added.

“I told Yaya, if you come to City, you’re going to be an important player, a legend. I am very proud of my brother, there’s not many players like Yaya.”

City captain Vincent Kompany handed the armband over to Toure for his final appearance, and the Belgium defender also praised the 34-year-old.

“To be a legend, you need to have longevity and to be there in key moments,” Kompany said.

“If you’re not going to be a legend with that, you’ll never be.”

Thu May 10 , 2018
The French forward reportedly has a €100 million release clause and that would be a bargain, according to his team-mate Atletico Madrid star Antoine Griezmann would be a “cheap” buy for €100 million (£87m/$119m) according to team-mate Filipe Luis. Griezmann, 27, is linked with a move to Barcelona at the end of […]