Skip to content
It has been an emotional nine days for the 33-year-old, who feels he has made the right choice to leave Camp Nou at the end of the season

Andres Iniesta wishes his Barcelona dream was “eternal” but says he made the most “honest” decision for the club by deciding to leave after celebrating a ninth La Liga title.

Barca captain Iniesta took his combined career tally of major honours for the Catalan giants and Spain to 35 as Lionel Messi scored a hat-trick in a thrilling 4-2 win at Deportivo La Coruna on Sunday to ensure they cannot be caught in the top flight.

It capped an emotional nine days for Iniesta, who scored in the 5-0 Copa del Rey final demolition of Sevilla last weekend before announcing on Friday that this season would be his last with Barca, ending a 22-year association.

And Iniesta was in a reflective mood when speaking to Movistar after the Depor match, saying: “I’m making the most honest decision for me and for my club.

“I want to finish with good feelings, then go to the World Cup and now to another adventure.

“I wish this was eternal. I’m the first one who would like this not to end but all this has its beginning and its end.”

Iniesta’s announcement led to tributes throughout the world of football for a remarkable Barca career, including from Real Madrid legends Sergio Ramos, Iker Casillas and Zinedine Zidane. 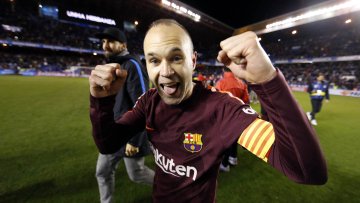 He was also afforded a warm reception from the Riazor crowd when making a late cameo against Depor, who were relegated following the defeat.

“They are really indescribable sensations on a personal level and as an athlete,” he added.

“There are no words when you get so much love from people. And more in difficult situations like these. The gratitude to the people is eternal.”

What Jonathan told me about Nigeria’s economy – Okonjo-Iweala

Mon Apr 30 , 2018
Ngozi Okonjo-Iweala, a former Minister of Finance has said former president Goodluck Jonathan acknowledged that he did not know economics, but had a clear direction of where he wanted to take Nigeria to. This is contained in her recently-released book, Fighting Corruption is Dangerous. Okonjo-Iweala narrated how she joined Jonathan’s […]