Skip to content
The visitors had Sime Vrsaljko sent off early on at Arsenal, leaving their head coach to marvel at a 1-1 draw

Diego Simeone saluted Atletico Madrid for again finding remarkable reserves of resilience on the European stage in a 1-1 draw at Arsenal.

Sime Vrsaljko was dismissed for collecting two bookings inside the opening 10 minutes of the Europa League semi-final fiirst leg at Emirates Stadium, while Simeone was sent to the stands shortly afterwards by referee Clement Turpin.

La Liga’s second-place side dug in and only fell behind to an Alexandre Lacazette header after the hour.

Antoine Griezmann was partially culpable for the opener, giving the ball away on the edge of his own area, but the France forward provided a sting in the tail as he seized upon a slip from international colleague Laurent Koscielny eight minutes from time.

Atleti’s rearguard recalled their Champions League efforts against Barcelona in 2016, when Fernando Torres was sent off but they persevered with reduced numbers at Camp Nou and prevailed in the home leg – something they hope to repeat against Arsenal next week.

“Surviving in the Europa League would be the best way to describe it,” Simeone told a post-match news conference.

“I remember a game in Barcelona when Filipe [Luis] was sent off after 13 minutes, or another Champions League game when Torres was sent off.

“The team has done fantastic work for a number of years. In a stadium like this, the attacking football Arsenal played, the team had to keep going every minute. That’s the most beautiful thing about football.

“It’s really hard to play away at Arsenal – an extraordinary stadium, a spectacular coach in the opposite dugout – with 10 men. These Atletico players, the way they played and put up with the pressure was tremendous. The fans brought a positive energy to accompany our passion.

“You guys have no idea how difficult it is to defend. Football is about playing and playing is the fun part, but you’ve got to have balls to defend with 10 men for 80 minutes. 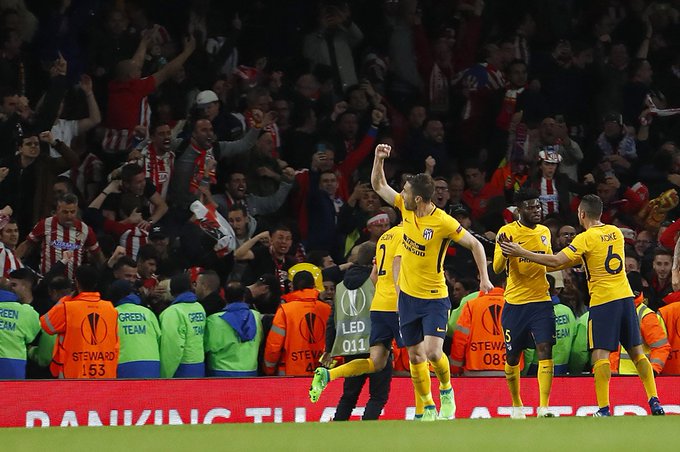 “If you play normally you have more possibility [to score], but defending like that shows real character – it’s a message for those who come along with us.”

Atletico have not conceded in their past 11 outings at the Wanda Metropolitano but Simeone does not make his men favourites.

“It’s been a difficult year,” he added. “A lot of change, with a fantastic new stadium, our new home. We’ve got a 50 per cent chance of going through.”

Fri Apr 27 , 2018
The French hitman has been strongly linked to Camp Nou and has affirmed he is currently discussing his future with the Europa League semi-finalists Atletico Madrid forward Antoine Griezmann has revealed he is in talks with his club, as rumours surrounding a possible move to Barcelona continue to circulate. The […]

The 8 Most Famous Fashion Designers In The World

How To Become an OAP In Nigeria (Radio & TV ); Full Guide