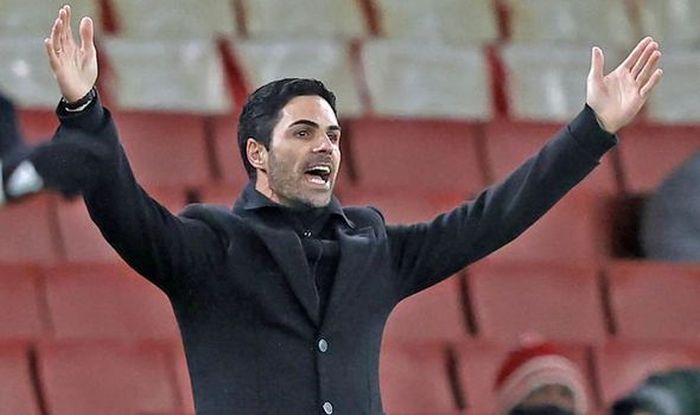 Arsenal boss, Mikel Arteta has warned the Gunners that their reunion with former boss Unai Emery will be tough. Arsenal defeated Slavia Prague 5-1 on aggregate to book their place in the semi-finals of the Europa League where they will now face Villarreal. Nicolas Pepe fired Arsenal ahead before Alexandre […]

Mikel Arteta admitted Arsenal were lucky in a 2-1 win over West Ham, but was pleased with his team’s belief on Saturday. After Michail Antonio cancelled out Alexandre Lacazette’s opener at Emirates Stadium, Eddie Nketiah came off the bench to score an 85th-minute winner for Arsenal. West Ham had 14 attempts at goal […]

Arsenal manager Mikel Arteta says his side played “exactly” the way he wants them to in the early stages of their 1-1 draw with Crystal Palace on Saturday. The Gunners’ struggles continued this week when they were held at Selhurst Park when Pierre-Emerick Aubameyang’s early opener was cancelled out by […]

Mikel Arteta says he believes Arsenal midfielder Granit Xhaka will stay at the Emirates Stadium in the January transfer window, despite speculation linking him with a move to Hertha Berlin. Xhaka had been widely expected to leave the club either in January or at the end of the season after […]

Arsenal boss Mikel Arteta expressed his frustration at referee Craig Pawson’s decision not to show a second yellow card to Chelsea midfielder Jorginho during his side’s 2-1 defeat at Emirates Stadium. Jorginho had already been booked when he tugged back Matteo Guendouzi as the Gunners midfielder looked to launch a […]

Arsenal manager Mikel Arteta insists he does not want Granit Xhaka to leave the club, clarifying that illness kept the midfielder out of Sunday’s match against Chelsea. Xhaka was absent as the Gunners went 2-1 down at home to the Blues, raising questions over his future at the club. The […]

New Arsenal manager Mikel Arteta says that it is a “huge honour” to take over at his former club, adding that the board has made it “very clear” that he is to compete for trophies now that he’s in charge. Arteta was appointed Arsenal boss on Friday following a week full of […]

Arsenal’s new boss Mikel Arteta has claimed being ruthless and consistent is what has made Pep Guardiola such a successful manager. Arteta was announced as Arsenal’s new permanent head coach on Friday, with Freddie Ljungberg having been in interim charge since Unai Emery was sacked in November. He joins the […]

Manchester City boss Pep Guardiola is not just a tactical genius, but also a “tireless worker” behind the scenes, according to his assistant Mikel Arteta.   Guardiola succeeded Manuel Pellegrini in the hot seat at the Etihad Stadium back in 2016, after taking in hugely successful spells at Barcelona and […]

A late U-turn on the part of the Gunners saw PSG’s former boss chosen ahead of Arteta, who had been tipped to take over from Arsene Wenger Unai Emery is set to be named new Arsenal manager after the Gunners made a last-minute decision not to offer Mikel Arteta the […]

The former Gunners skipper, who is now a coach at Manchester City, is among the leading contenders to inherit the managerial reins at Emirates Stadium Mikel Arteta has “earned the right” to be considered for the Arsenal job, says Tim Cahill, with the Gunners wise to look to former heroes for assistance […]

The Manchester City coach is now being backed by key members of the club’s hierarchy after Massimiliano Allegri pulled out of the running Mikel Arteta has emerged as Arsenal’s primary target to become the club’s new manager. The former Gunners midfielder, who currently works under Pep Guardiola as a coach at Manchester […]

Full Biography Of Wizkid & Net Worth: Cars, Houses and Facts

Dagrin And His Legacy In Nigerian Rap Music

‘I add weight when I am stressed out’ – Actress, Mercy Aigbe talks about her body