Mikael Silvestre has ruled Manchester United into the Premier League title race and boldly suggested that Manchester City will not be in the running. The battle for domestic supremacy in English football appears set to go down to the wire this season, with several sides harbouring realistic ambitions of chasing down the ultimate prize. […]

Tottenham manager Jose Mourinho says that Spurs must learn how to kill a game after seeing his side squander another lead on Wednesday. After going up 1-0 through a Harry Kane header, Spurs conceded a late goal to Fulham in what ended as a 1-1 draw. Having lead for a bulk of the […]

Jurgen Klopp insisted there was no plan for Liverpool to dominate the world for years to come, insisting it was tough just to be successful in England. After leading Liverpool to the Premier League title last season, Klopp was named The Best FIFA Men’s Coach on Thursday, with four Reds also part of the […]

Manchester United will be Premier League title contenders if they keep Paul Pogba and Bruno Fernandes on the pitch and out of the stands, says Michael Owen. The Red Devils last enjoyed domestic dominance back in 2013, as Sir Alex Ferguson prepared to head into retirement. Alarming regression has been endured since then, […]

Edinson Cavani has been charged with misconduct by the Football Association after posting a racially insensitive message on social media, with Manchester United mulling over their response. The experienced Uruguayan striker made headlines on and off the field after bagging a brace in a dramatic 3-2 victory for the Red Devils over Southampton on […]

Chelsea manager Frank Lampard believes his side are suffering from fatigue after they lost 2-1 at Wolves on Tuesday. The Blues took the lead at Molineux through an Olivier Giroud goal, but Daniel Podence scored to pull the hosts level before Pedro Neto netted the winner deep in injury time. The loss is Chelsea’s second […]

Manchester City midfielder Ilkay Gundogan has said fixture congestion is partly to blame after his side were unable to defeat relegation-threatened West Brom at home on Tuesday. Gundogan gave his side the lead with a 30th-minute strike, but the Baggies drew level before half-time through an own goal from Ruben Dias. Though City dominated for […]

What is wrong with Sadio Mane? Something has clearly gone awry for the Liverpool forward, whose ability, end-product, consistency and street-wise nature made him one of the most-complete attackers in Europe. Undoubtedly, being voted Africa’s best player in January didn’t flatter him in the slightest, but the Senegal star has dipped since that mid-October meeting […]

Carlo Ancelotti has revealed that he made a promise to Everton’s majority shareholder Farhad Moshiri that he would turn the club into a team that compete at the top of the Premier League. Moshiri has invested £400 million ($540m) into the club so far, as per the latest set of published accounts, and is showing […]

Jose Mourinho has started to fan the flames ahead of Tottenham’s crunch clash with Liverpool at Anfield, with the Portuguese rubbishing claims that the Reds are suffering an injury crisis. For the Spurs boss, his opposite number, Jurgen Klopp, is contending with just one “big injury”. He concedes that Netherlands international Virgil van Dijk […]

Thomas Partey has thrown his weight behind Mikel Arteta by stating the Arsenal manager is building something good with the players at the club. The Gunners are enduring a four-game winless run in the Premier League and they currently occupy the 15th spot in the table with 13 points from 11 games. […] 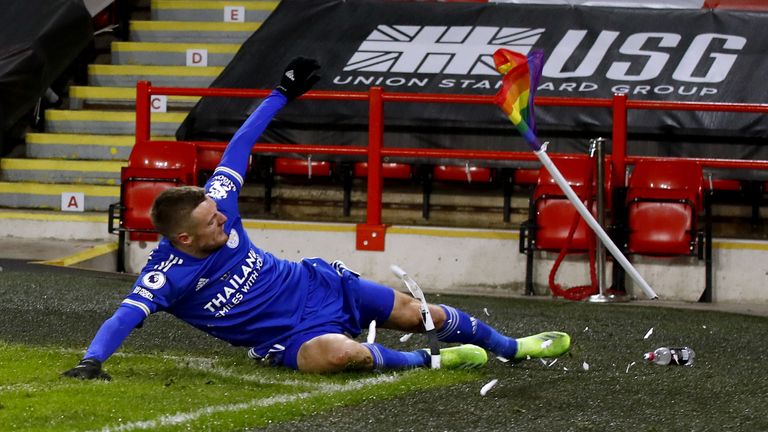 Jamie Vardy caused a stir when he smashed a Rainbow Laces corner flag after scoring the winner for Leicester City against Sheffield United but he has used the moment to show his support for the Foxes’ LGBT supporters’ group. Vardy scored a 90th-minute winner as Leicester beat the Blades 2-1 in the Premier League on […]

Chelsea are genuine Premier League and Champions League contenders, according to Joe Cole, who says the Blues have no weaknesses. Frank Lampard sought to build on an encouraging fourth-place Premier League finish in 2019-20 by recruiting the likes of Hakim Ziyech, Timo Werner, Kai Havertz, Ben Chilwell, Edouard Mendy and Thiago Silva in the […]

Tottenham star Harry Kane has called on Premier League players to continue taking a knee before matches. The custom, which stems from former NFL quarterback Colin Kaepernick kneeling during the U.S. national anthem, was adopted worldwide this summer in support of the Black Lives Matter movement. After protests over George Floyd’s death […]

Jack Grealish believes the VAR is “ruining the game” after Aston Villa were denied a late equaliser against West Ham. Having earlier missed a penalty on Monday, Ollie Watkins thought he had made it 2-2 in additional time, only for his strike to be ruled out by the VAR following a tight […]